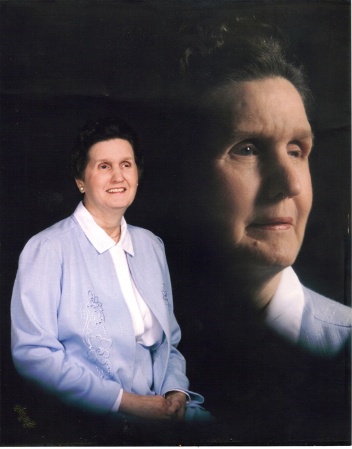 Mabel Martin was born in Cleveland County, NC.  Her father was a part-time carpenter, and her mother was a full-time mother of nine.  Her entire family pitched in to grow cotton, corn, and vegetables on the family land to make ends meet. 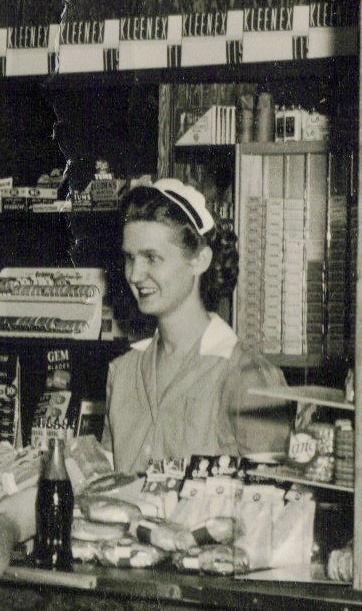 During that time, she married Don Conder.  He was also legally blind, and they had 2 children, a daughter and a son.  She spent the next several years being a full-time Mom.  After her children started school, she began installing handwoven cane bottoms in antique chairs, which was something she could do at home and still be around when they needed her.  She also found time to take a sewing class at Central Piedmont Community College.

During that time, Mabel also became much more active in various organizations that help and provide opportunities to the blind.  After working with the North Carolina Association of Workers for the Blind for many years, The North Carolina Lions Foundation recognized her as a leader in the blind community. In 1968, the NCLF appointed her to the advisory panel responsible for recommendations for the planning and development of Camp Dogwood, a 42-acre lake front resort that provides week-long vacations to several hundred blind “campers” each year.  Activities include adapted water sports, boating, fishing, crafts, games, providing all meals and spacious, comfortable, and handicap accessible accommodations.  She served on the panel for 2 years, and has attended Camp Dogwood every year since it opened.  Today she is still the organizing force for a group of friends who get together for several weekends throughout the year at the camp.

In 1969, she was involved with the establishment of the Charter of the North Carolina affiliate of the National Federation of the Blind.  She went on to serve in several Officer and Board positions at the state level for over three decades, and was awarded the Clarence Collins award for her dedication and accomplishments:  (an award given only 4 times in the history of the organization.)  Although she has retired from participation in the State affiliate, she remains active in the Mecklenburg Chapter to this day. 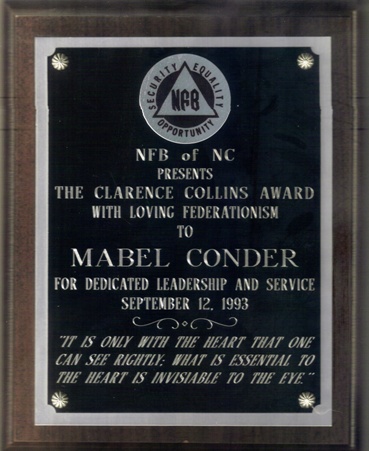 After her children reached an age that didn’t require constant supervision, Mabel returned to the outside work force.  After a difficult battle to overcome the stigma of hiring a blind person that existed in the private sector at that time, she was given an opportunity by GAF Corporation.  She worked processing photos in a dark room, and proved herself as well as the abilities of blind people by consistently exceeding production by unprecedented levels.  After 6 years there, she pursued a better opportunity in the same field with Eckerds Corporation.  Even while working full-time (3rd shift), she found time to become involved with the Metrolina Association for the Blind (MAB) in Charlotte.  In 1977, she started serving on the Board of Directors as not only the first blind person, but also the first woman ever to serve on the MAB Board.  At that time, MAB had a Director and only 3 employees and because of an absence of services being provided, the organization was about to lose its United Way funding.  After she went on the Board, MAB was completely restructured, and has consistently grown into the agency it is today.  Serving as the President of the Board of Directors twice, she has helped guide MAB to become the world class agency it is now!  With over 40 employees, MAB provides dozens of services to hundreds of blind and visually impaired people.  Also, it has become more and more self-funding.  She served on the MAB Board for almost 3 decades.  In 2005, she was awarded the Association’s most coveted honor, The Spivey Award.  This was only the 2nd time this award has been given in the history of the 70-year-old association. 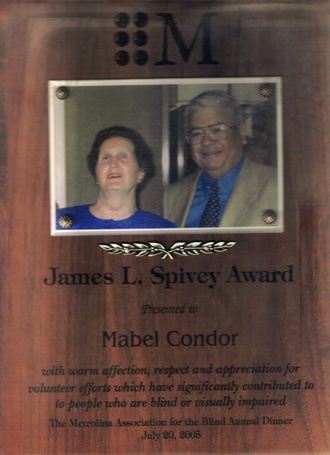 Sometime around 1984, Mabel’s work at Eckerds, her volunteer work with the NFB and MAB, and her daily tasks as a homemaker obviously became boring to her, so she became more passionately dedicated to an endeavor than ever before:  BRIDGE!  She joined the Charlotte Bridge Association and plays at least once a week.  She is a shark!  She consistently wins, playing with the best players around.  She has accumulated enough “points” to be a “master”, but won’t take them, because, in her words, “Those people play for blood!  I love to play for FUN!”

In 1988, Mabel fell, and broke her shoulder.  After many complications, including a failed prosthesis, the doctors had serious doubts that she would ever have much use of her right arm and hand again.  Also, severe back problems prompted a doctor to tell her many years ago that she would be in a wheelchair within 6 months.  However, the fighter that she is, she has far exceeded expectations in both cases.

She has said on many occasions that her orthopedic problems have been much more of a handicap to her than her blindness has ever been.  Her physical limitations forced her to retire from Eckerds.

After spending her entire life “on the move”, she must spend a lot more time in her easy chair these days.  Though many people would be very content with the easy-chair lifestyle, Mabel says she finds it frustrating.  But she has found many things to do within range of that chair:  she volunteers giving Braille lessons to adults who have lost their sight, and preparing cassette tapes of the Sunday services at her church for those who are too disabled to attend.  She also pursues her hobbies such as caring for her tropical plants, crocheting, canning vegetables from the garden, cooking, reading, and more.  She is an avid reader, and loves books on tape.

If you call on her, it’s not unusual to find her sitting in her easy chair, crocheting.  If asked “What are you doing?” She’ll reply, “Reading a book, doing laundry, making a baby blanket, and cooking dinner.”  Multi-tasking like this, she can still accomplish more in a day than many people!

Mabel’s lifelong dedication to accomplishment has caused any attempt to write anything about her to be very lengthy, despite the author's efforts to be concise.